Hello folks and Welcome to Retro Dee Reveals where I’ll be revealing the songs I voted for in the The Grooveyard Great 88! 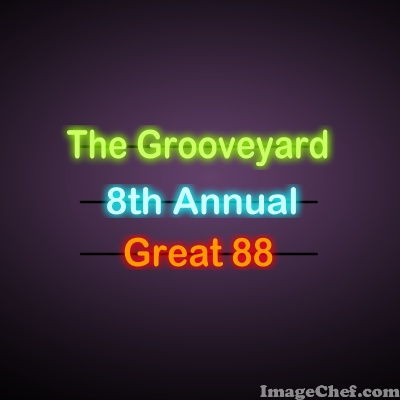 This year’s survey was extra special because it’s the 8th Annual Great 88 on 88.1 FM!

Listeners could vote daily for up to 10 songs in each category. The results were posted as each section closed.

The three Final Round categories allowed listeners to vote for up to 15 songs.

On December 28, 2019 the results of this year’s Great 88 survey were revealed! D.J. Alan Seltzer hosted a 5-hour long show, counting down all 88 songs in the order of which they were voted for by listeners.

So what did I vote for?

My passion is the 1950’s, so most of the music I like comes from that decade. It was hard to limit myself, though. There are some great early 60’s songs that are still very much in the “Malt Shop Era”.

I had the most difficult time voting on the 1958-1960 survey. It was impossible to not leave out some of my very favorite songs. Choosing the songs on the 1957 and Before survey were also pretty tough. I mean, think about it, folks… What if someone told you that you could only pick 15 of your favorite songs of all time? You’d have an easier time solving quantum equations. Am I right?!

Yes, that’s true. But within that short period of time, ALL of my favorite songs reside. Early Rock n Roll is my LIFE. Everything else is just details. See?

#80 “Heartbeat” – Buddy Holly (1958)  Buddy Holly was one of few artists who could actually articulate well enough so you can understand the lyrics. I get most of what he’s saying without having to look anything up… But as articulate a fella as Buddy was, I wasn’t getting “piddly-pat”… This song was written by one of Buddy’s best, uh, buddies, Bobby Montgomery.

#77 “Little Star” – The Elegants (1958)  I was surprised this song wasn’t higher on the survey this year. It is such a cute and romantic tune.

#74 “Bird Dog” – The Everly Brothers (1958)  This is my favorite song by Don and Phil, because it’s one of the best songs ever made. They say art and music are subjective, but I think in this case, it’s closer to a hard fact.

#73 “Whispering Bells” – Del Vikings (1957)  This is another one I thought would be higher. It’s a great song… and educational too. In the 50’s, bells didn’t just ring, they whispered. Who knew?

#71 “It Doesn’t Matter Anymore” – Buddy Holly (1959)  Last year I told my readers that this song has a special meaning to me but lucky for you, I wouldn’t tell it. Well, your luck has run out… This song was written by a young Paul Anka and recorded by Buddy Holly during the String Sessions on October 21, 1958. I first heard it on October 29, 2016, fifty-eight years later.

At that time, I had been living with heartache. There was an ex boyfriend that I just could not get over, no matter what I did. Time had gone by since our breakup, but it still didn’t get any better, until one evening, when I decided to listen to Buddy Holly.

“It Doesn’t Matter Anymore” was one of Buddy’s songs that I didn’t even know existed. And somehow, someway, the very moment that I first heard this song, something amazing happened: I got over my ex boyfriend. After years of pain and pining, it was over: Just. Like. That.

I never longed for that ex again. In fact, sometimes I wonder what I even saw in him in the first place. And most of my anger towards him has subsided too, because… “it doesn’t matter anymore.”

#69 “Claudette” – The Everly Brothers (1958)  I’d change my name to Claudette if it meant that Don and Phil were singing about me. But of course, we know that this song was actually written by Roy Orbison for his wife. So in all in all, Claudette’s getting the Big O.

#67 “Devoted To You” – The Everly Brothers (1958)  Empty promises or not, this is a beautiful song. And and a great example of the brothers’ harmonization skills.

#65 “Everyday” – Buddy Holly (1957)  I’ve liked song this since I was 13 when everyone else was listening to grunge and punk. Don’t talk to me about not fitting in.

#63 “Rave On” – Buddy Holly (1958)  My aunt was only a kid when this song came out and when she heard it on the radio, she thought he was saying a girl’s name: “Ravonne”… I guess that could be a name. Maybe a combination of Rachel and Yvonne… At any rate, I love this song, written, of course, by Sonny West.

#60 “Singing The Blues” – Guy Mitchell (1956)  I just recently started to really like this song. It’s not the typical Malt Shop hit.

#59 “Maybe Baby” – The Crickets (1958)  Is it me or does the beginning of this song sound like a more mellow version of “Invisible Sun” by The Police? It’s probably just me. Either way, this is another classic that has stood the test of time.

#57 “Oh Boy!” – The Crickets (1957)  This song was originally entitled “All My Love” when it was written by Sonny West. But when Buddy Holly got a hold of it… OH BOY! It exploded into a chart-topping hit that has become a timeless classic. Nobody can sing this song like Buddy Holly. Nobody. That means you, Stray Cats!

#55 “Be Bop A Lula” – Gene Vincent (1956)  I’ve heard three recordings of this song all by Gene Vincent, and one’s better than the last. The one on the survey is the original recording. It has to be one of the best songs of all time.

#52 “Lonely Teardrops” – Jackie Wilson (1959)  In the past year I learned a lot about Jackie Wilson and how extremely talented he was. I really like this song, so I decided to make it one of my votes. His son, Bobby Brooks Wilson, carries on his father’s legacy and is also a stellar performer.

#50 “Not Fade Away” – Buddy Holly (1957)  I finally figured out what’s odd about this song’s title. It’s actually a sentence fragment. Although don’t get me wrong, I’m not criticizing. I use sentence fragments all the time! Like this one. Plus, I think it’s kind of cool the way he wrote it. The whole song is grammatically incorrect, that’s part of what makes it so uniquely Buddy Holly. He definitely had a way of wording things that was kind of out of the ordinary… Am I making sense or just making everyone mad? I think I should just end the subject here.

#48 “Cathy’s Clown” – The Everly Brothers (1960)  This is the one and only song from the year 1960 that I voted for. I made up my own rule that I could only pick ONE song from 1960 (plus one Bonus Vote from 1961) It was incredibly difficult to choose. I had to let “True Love Ways” by Buddy Holly go as well as a couple of other favorites by Don and Phil from the same year. I asked myself which song I really like best and the answer came up “Cathy’s Clown”. So there you go.

#47 “Silhouettes” – The Rays (1956)  Despite having a silly story line, I love this song for its beautiful melody and wonderful example of the era that it is. I had to make this one of my votes this year!

At this point, I realized that most of the songs I’d voted for ended up in nearly consecutive order from #47 through #80. My worst subject in school was math, so I can’t work out why so many of the songs I chose ended up next to each other. I’m just surmising that there has to be some scientific reason for it.

The next song I voted for came in at…

#42 “Roll Over Beethoven” – Chuck Berry (1956)  I had to pick a Chuck Berry song, and it took me a while to choose which one. There’s “Maybellene”, and “Johnny B. Goode” but I hear those so often. So I went with a lesser-played-out song which is actually just as good as the other two. (As a side note, I wonder what Schroeder from The Peanuts would think of this song?)

#39 “Walk Right Back” – The Everly Brothers (1961)  This was my personal Bonus Vote from the 1961-1963 Survey. I thought about leaving it out, and keeping my votes an even 30. But I had to add this one. It’s one of my favorites by Don and Phil and to top it off, it was written by Sonny Curtis, another of Buddy Holly’s closest friends.

#31 “Peggy Sue” – Buddy Holly (1957)  Falling 7 notches from last year’s survey, “Peggy Sue” is number 31… You know, I thought I’d seen everything there is to see in California until I found out that the Sacramento Memorial Auditorium is the place that young Peggy Sue Gerron first heard her song. What a night it must have been! By visiting that venue, I know I could still feel the magic in the air… that is, if I could survive the traffic on Route 37… Maybe I’ll just imagine the magic from here.

#26 “La Bamba” – Ritchie Valens (1958)  You could say I voted for this because I didn’t want to snub Ritchie Valens who famously perished in the same plane crash with Buddy Holly, way before his time. You could say I just picked it out of respect. You could say that, but you’d be wrong. This adaptation is so amazingly brilliant and one of the greatest Rock N Roll hits of all time. Vote worthy in every way!

#24 “Wake Up Little Susie” – The Everly Brothers (1957)  This song got banned in Boston for maybe, possibly, not really alluding to sex. And yet Buddy Knox had that “Party Girl” song where he says right out: “I’ll make love to you”… If The Everly boys got banned and Buddy Knox didn’t, they should’ve been pissed. I hate double standards. But then someone told me that people in the 1950’s were so innocent, that “making love” could’ve simply meant just kissing. But don’t take my word for it. By the time I came around, we used a totally different term.

#19 “That’ll Be The Day” – Buddy Holly (1957)  One day back in Lubbock, nineteen-year-old Buddy Holley was at the movies watching The Searchers. John Wayne kept saying “That’ll be the day” throughout the film. And Buddy was like, “Hey, that’d make a great song”… I didn’t even know that until a few months ago. I’m a terrible fan.

#5 “Earth Angel” – The Penguins (1954)  This is one of the most quintessential songs of the 1950’s decade. It’s the song you picture being danced to on Prom Night. So romantic, it’s cliched, then it goes back to being romantic again.

So that’s it for my votes!

If you don’t know already, I’m sure you’re dying to know what #1 is, but I’m not gonna tell ya! You’ll have to check it out HERE on The Grooveyard’s web site where videos of all the songs are posted in the order of the way they were voted for. There’s lots of trivia too, better than mine, so be sure to check it out!

I want to thank D.J. Alan Seltzer for a great survey, a great show and a wonderful year of inviting me to contribute to The Grooveyard. I can’t wait for 2020!

Disclaimer: Names, titles, lyrics, and all copyrights are retained by their original owners. I do not claim ownership of any such material.

My ideal world is pretending to be a virgin in the 1950s. View all posts by retrodee